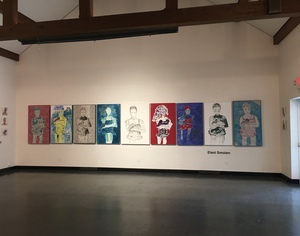 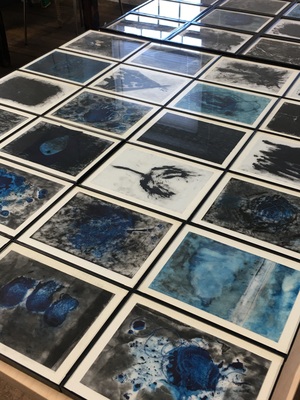 Buster Levi Gallery, Cold Spring, New York is pleased to announce an exhibition of new work by Eleni Smolen on view December 4 - 27, 2020. The Gallery will be open for limited viewing on Saturdays from 1 - 6 pm and by appointment.

The common ground which runs through this recent body of drawings is, perhaps, an acknowledgement of moods and emotions concerned with sorrow, solitude and quiet despair. Responding to events in the wider, outside world and the inevitable emotional toll on the psyche, the artist initiated a new series of drawings inspired by the film, The Turin Horse, by Hungarian director, Béla Tarr. Smolen states, “I have had several indelibly imprinted experiences and seeing this particular film the first time was one of them. The haunting and mesmerizing experience of the long takes and the repetitive soundtrack combined with the minimal yet crushing narrative, resonated with me a long time ago and the events over the course of the past few months made me want to revisit the film.”

Four large, unframed drawings from The Turin Horse Series were to be included in the exhibition (51 x 46 and 46 x 51 inches) in charcoal, graphite and sumi ink: Breath I; Ohlsdorfer with Daughter and Horse; Ghost I; The Well and Heading Home.
During the course of the installation, however, it was decided that they wouldn't be exhibited in order to present a more cohesive and consistent show. They seem to call for their own exhibition at another time. They can be viewed at the artist's studio should one be interested in seeing them before that happens.

The other new series this year, Surfacing, is comprised of much smaller works (7 x 5 in) on either wooden panels or acrylic rice paper. Surfacing I, is one large panel, 28 x 70 inches, comprised of 56 wooden pieces, each 7 x 5 inches. Mediums vary from a combination of charcoal, sumi ink and/or oil in layered, monochromatic tones of black, white and blue-grey.

Drawings on acrylic rice paper in the same series are all individually framed and presented as unique pieces. The intimacy of the scale (7 x 5 in) contrasts with the physicality of the layering involved in working up many of the surfaces here and the artist became aware of the emotional release. She states, “I felt more and more compelled to keep doing these little works, not knowing where they were taking me, or what they meant, but finding consolation and balm in the process. I realized later that they were a direct reaction to the corresponding events over the course of the summer; I had lost my desire for exuberant color and went out and stocked up on charcoal and sumi ink.” While most of the work in the Surfacing series are miniature abstractions and patterns – sometimes combined with strands of thread, here and there one will find semi-recognizable shapes of trees, forests, flowers, birds, mountains and, as well as hand-scribed entries from the artist’s journal or a quotation from a revered individual.
Smolen explains, “the emotional impetus for the series was, initially, the feeling of going under, feeling radically hopeless and despondent, not just because of professional disappointments, but also, because of the traumas and cruelty which seemed to escalate and pervade our news cycle in a torturous, repetitive manner.”
Working through a particular idea and image through multiple riffs and variations has been standard practice for the artist since she started painting in the mid-nineties. Series include the early, abstract Biophilia, Dharma Rain and Persistent Song; the horse motif in Ridgeline and Wherever I Travel; and the memorialized girl holding the bird in Girl by the Sea and Guardian Series.

Smolen is deeply connected to and concerned about the natural world. She ascribes to Edward O. Wilson’s concept of “biophilia,” the word he coined to describe humankind’s deep affinity for nature. The artist believes nature is, as Wilson describes it, “the refuge of the spirit, remote, static, richer even than imagination.” A former gallerist, the artist decided to return to her own art practice in 2018 when she closed the brick and mortar TheoGanz Studio on Main Street in Beacon where she presently lives with her husband, David, and their dog, Henry. She has a studio in Newburgh, New York at Regal Bag Studios on the waterfront of the Hudson River.

Smolen has had exhibitions at the Delaware Valley Arts Alliance; The Hammond Museum & Japanese Stroll Garden; The Woodstock Artists Association and Museum; Holland Tunnel Gallery (Paros, Greece; Newburgh, NY), Shippensburg University Gallery and September, Hudson, NY, among other venues. The artist continues TheoGanz Studio as a business handling original Inuit graphics and carvings from Kinngait – formerly known as Cape Dorset.  Visits are by appointment only and by special exhibition hours as posted.

I finally put together a little record (click on the title of this news item above) of my solo exhibition at WAAM (Woodstock Artists Association & Museum), the one that no one ever saw – except for a few other souls – because it closed down on March 13, 2020 never to reopen. No worries. I am grateful for other opportunities that have arisen and am also grateful for my family and friends, young and old, for all of their creative and humanitarian energies for such good causes and projects, near and far. You are such an inspiration. Stay well. Be safe.
Eleni
August 2020